It is not a wine, it is a legend: anyone who brings a glass to his lips, sips 300 years of history. The story and the legend have started with Pierre Pérignon, the legendary Benedictine monk who has been the cantiniere and administrator of the abbey of Hautvillers for 47 years, from 1668 to 1715 and universally known as the inventor of Champagne.

Actually Dom Pérignon did not invented anything but he is undoubtedly the main character in the process of making sparkling champenois. Before him, the only one produced in the region was vin gris and it was a white wine obtained from red grapes, and it was a still wine that had, however, the tendency to foam innately.

Dom Pérignon understood that was necessary to find the way to preserve the wine effervescence. How? Putting it in bottle (instead of keeping it in barrel) and sealing it tightly with a cork stopper, invented in those years, instead of the traditional wooden toggle.

The climate and the vines

The sparkling wine born by this intuition it was called Champagne with the name of the region. It has aromas of exceptional finesse because it comes from clusters ripened beyond the 49th parallel, the last frontier in the north for the cultivation of the vine. It is characterized by inimitable elegance, great harmony between the acidity freshness of its flavor and the warm sweetness of its alcohol. But the grape of Champagne is certainly not ripe in the harsh climate of the Ile de France if the soil on which the vines are implanted is not a subsoil that reverberates the heat of the sun and that the roots of the rain water, absorbing it when it is in excess and returning it slowly during the summer drought.

And beyond climate and soil there is another factor that makes Champagne the noblest of sparkling wines. The vines that the vineyards have selected over the centuries to produce it: the Chardonnay, a white berry, grown in the Côte des Blancs, south of Epernay, from which the wine derives elegance and finesse; the Pinot Noir, a red berry from the Mountain of Reims, which gives it the power and the body and the Pinot Munire, a red berry too that gives freshness to the wine and that grows in the Marne Valley. They are precious and treated delicately: harvested by hand, they are also subjected to soft pressing. Separately, vineyard by vineyard, removing the skins and graspi from the must: that’s why we come from Pinot Noir and Pinot Meunier white juice.

When the fermentation is completed and the wines are stabilized, the result can be considered the Champagne’s raw material.

Champagne originates from a cuvée, that is from a mixture of wines obtained from the three vines of various vineyards: not only those of the last harvest but also of the previous vintages. It is a complex assembly, but it is also essential to obtain the same taste every time. The next step is the friction. In order to create the tiny bubbles in the wine (the famous “perlage”) it is necessary that the wine ferments for the second time in the bottle, so that the carbon dioxide inside can not be dispersed in the air and it melts inside. The wine is then bottled temporarily with the addition of a sugar syrup and yeasts which can re-establish the fermentation. When this is finished, the Champagne is ready but it is necessary eliminate the deposits that can muddle it. It can be done in two times. The first step is the remuage: it can be done manually (now in disuse) or automatically (with machines). In both cases the bottle is periodically shaken until the deposit is slid on the neck, close to the cap. During the second step, the deposits are expelled with the dégorgement: the liquid in the neck is frozen, the temporary cap is removed and an internal pressure is applied.

After refilling the bottle, the process is repeated and when it is concluded definitively it is applied as cap a mushroom cap stopped by a wire cage.

Champagne is not a single wine but is plural due to the fact that there are so many different types of that. As all great wines, even the Champagne was born in the vineyards and this is why the most important differences arise from the vineyards properly. In French language, the vineyard is called vignoble. But when a fine wine is made from specific grapes, it is used another word: cru. The cru means specifically a privileged vineyard. The one in which wine, thanks to the inscrutable gift of nature, has a strong, unmistakable character, an extreme finesse and the ability of lasting longer over time. In the territory of Champagne, the cru areas, are more than 300 and they are divided by several municipalities. Although their heroic vocation is indisputable, they do not give all grapes of the same quality.

But is it possible measuring an impalpable characteristic such as quality? 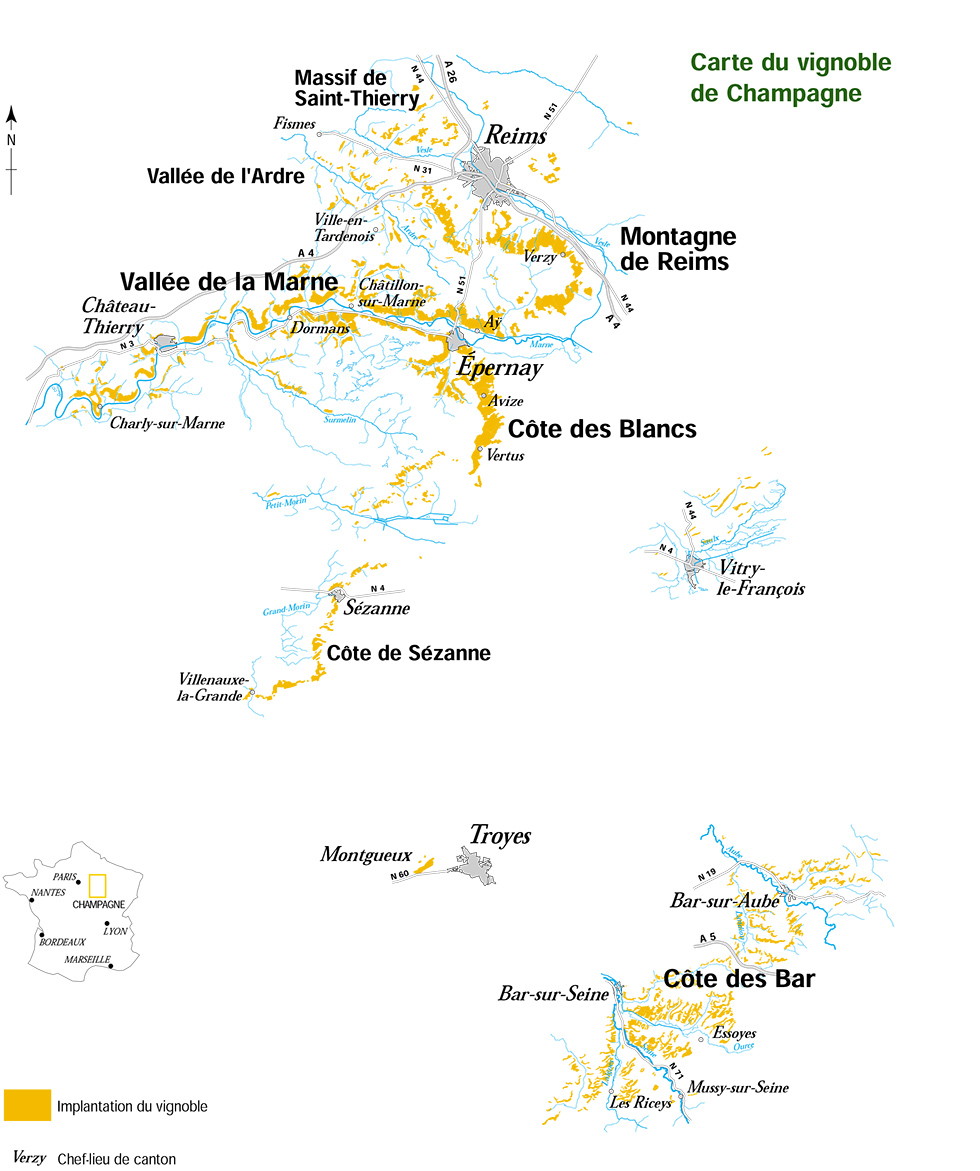 Absolutely yes. For instance, just referring to the price that buyers are willing to pay for the grapes. Every year, thanks to an original agreement signed in 1919, the representatives of the vignerons and the great sparkling wine producers agree to fix together the price at which a vigneron can sell his grapes to a producer. It is not a single price but it represents the maximum price. That amount is defined only for the clusters of the finest land. And the others? For the other areas, it has created a hierarchy of crus translating it into a percentage ranging from 80% to 100%. Applying the percentage to the maximum price, it is possible getting the quotation for each zone.

Periodically overhauled, the classification now divides the vineyards into 17 grand cru (100%), 41 premier cru (from 90% to 99%) and 250 cru (from 80% to 89%). With all these variables, it is not surprising that in addition to the more widespread type of Champagne (taken from white grapes and black grapes of various crus, without vintage indications because its cuvée is composed of wines of different harvests) if they produce several types:

Cuvée special, assembly of wines exceptional quality (each Maison calls it with a different name);

Millesimato, is the Champagne that declares on the label the year of the harvest;

Grand cru, is made with grapes harvested in vineyards classified 100%;

Premier cru, is made with grapes harvested in vineyards classified between 90% and 99%;

Monocru, prepared with grapes from a single vineyard instead of cuveé. Very rare.

The influence of the liqueur d’expédition

There is Champagne and Champagne, depending on the taste. It can be very dry, or also soft, sweet … But how is it possible to get different flavors, if the wines are born in the same way?

The secret is in the liqueur d’expédition, the liquid that is added to each bottle to top it up after the dégorgement. If the addition is of the same wine that has been lost by expelling the frozen deposits, the Champagne will be called Brut Nature (or Pas Dosé). Before the Second World War it was called Sans Sucre, but its acronym was “SS“, and after the conflict and the Nazi occupation no producer had the courage to use this definition. The taste of Brut Nature is dry as a shot (by the way), but generally in the liqueur d’expédition is dissolved some sugar in varying amounts. Depending on its dosage, the Champagne becomes more or less lovable. There are a seven types in total:

A passionate oenologist looking to change the wine scene by concretely tackling
White grape vine, widespread mainly in the Marche, where it is probably
The US federal government approved aid Saturday for California while thousands of
Torna Su