The US federal government approved aid Saturday for California while thousands of firefighters fought to contain a series of violent fires that killed at least seven people and destroyed at least 500 buildings. At least 37 thousand people have been evacuated. Emergency also in some areas of the Napa Valley, where the famous Californian wine is produced. In declaring the state of emergency in California, President Donald Trump “ordered federal assistance to complement state and local response efforts due to emergency conditions resulting from a fire starting July 23,” said the White House. 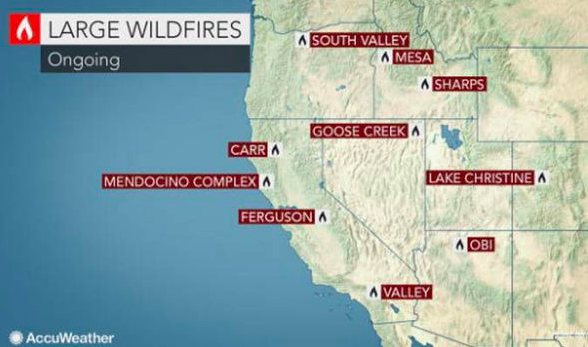 The largest of the bonfires that threaten the western state has almost doubled, while another has forced thousands of people to flee and a third has forced to dispose of the partial closure of the famous Yosemite National Park.

Two young children and their 70-year-old grandmother, Melody Bledsoe, died in the so-called ‘Carr Fire’ (because it started with the burning of a broken down car) as confirmed by family members in the US media. The fire also killed two firefighters, said the California Forestry and Fire Department, while another – the ‘Ferguson Fire’ – killed another firefighter.

The ‘Carr Fire’ in Northern California – which began last Monday – consumed 32,749 hectares, compared to 19.551 on Friday, again according to the State Forestry and Fire Department. “The winds, the high temperatures and the dry vegetation still have the potential to fuel the growth of fire: the spread of fire has been active in all directions and has made significant steps”, said the State body that it takes care to protect public and private forests from fires. On Friday, Governor Jerry Brown called for federal assistance “to save lives and protect property” and here is Trump’s answer, with the go-ahead for federal aid.

Per CAL FIRE: “For information on evacuation notifications visit http://www.shascom911.com. Click for the most up to date evacuation orders and advisories at the Shasta County Sheriff’s page.”

A passionate oenologist looking to change the wine scene by concretely tackling
It is not a wine, it is a legend: anyone who brings
White grape vine, widespread mainly in the Marche, where it is probably
Torna Su